Originally built in 1928, the Edgartown Yacht Club has become a celebrated landmark due to its sizable contributions to Edgartown’s maritime history and the community at large as well as its close proximity to the water. Unsurprisingly, its unique coastal location – on a wharf thirty-feet out on Edgartown Harbor – also has its downsides which became apparent during the notable hurricanes of 1938, 1944, 1954, and 1991. In recent years, however, the clubhouse has been experiencing periodic flooding in response to rising sea levels.

After years of enduring frequent water damage, September 2018 marked the start of an important and historic renovation to the Edgartown Yacht Club which will raise the clubhouse two feet above the water. Unfortunately, flooding is still plausible with the threat of storms and continued climate change; however, it won’t flood as nearly as much as it does now, which was confirmed with the help of Dick Barbini of Schofield, Barbini and Hoehn.

Wednesday, September 19th, Atlantic Marine Construction began with cutting around the perimeter of the clubhouse and lifting the existing structure with hydraulic jacks. The wharf’s current piles, wooden timbers soaked in creosote, were replaced with a series of new steel piles installed around the edges of the wharf into the bottom of the harbor to support a bed of steel planks. The new piles are made from rust-resistant epoxy-coated steel (which is much better for the environment) and the existing wooden piles were cut down rather than extracted to avoid disturbing the harbor floor. With the new floor installed, the walls and roof were lowered back down and now the Edgartown Yacht Club is two feet higher! 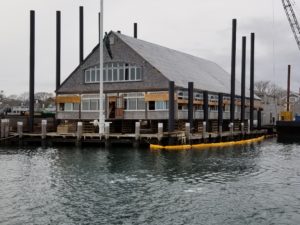 While preservation drove the main goal of the project, the club will also undergo a moderate expansion including a public viewing deck on the second floor of the entry building. And we are pleased to share that the building will be handicapped accessible.

The project is moving along well and on schedule for the re-opening during Memorial Day Weekend. We are looking forward to celebrating the re-birth of the Edgartown Yacht Club with the club members and the Edgartown community at large.